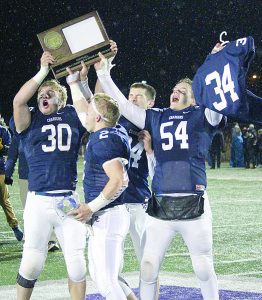 A season to remember for the DC football program

The 2019 Dassel-Cokato High School football season was a special season, one the players, coaches, and fans will never forget.

After a rather pedestrian 5-3 regular season, DC rattled off five straight playoff victories, including two dramatic come-from-behind fashion, to advance to the Class AAA State Championship game at US Bank Stadium.

The Chargers entered the game as heavy underdogs against the undefeated and top-ranked Pierz Pioneers.

However, the team did not back down, and DC and Pierz traded touchdowns in a wild, back-and-forth thriller.

Unfortunately, the Pioneers scored a last-minute touchdown to score a 28-27 victory, relegating the Chargers to a runner-up finish.

It was the first time Dassel-Cokato had advanced to the state title game since 1972, nearly 50 years ago, where they also finished in second place.

Along the way, the players, coaches, and community honored the memory of their fallen teammate, Jacob MacDonald.

MacDonald, who was a starting linebacker as a sophomore, passed away midway through the 2017 season two years ago after an allergic reaction.

The 2019 season would have been his senior year, and his senior teammates commemorated his presence every step of the way, honoring him by carrying and displaying his jersey at every game.

The Chargers started out the 2019 season strong, opening with back-to-back shutouts over Little Falls and Holy Family.

DC then defeated Princeton 20-14, but lost their first game of the season to New London-Spicer 26-20 on the road.

This game was significant because, after trailing 20-0 at the half, the coaching staff turned to a three-back wishbone offense in the second half, and nearly came back to win.

The Chargers would utilize this formation almost exclusively the rest of the season.

DC followed up with a thrilling 28-21 overtime homecoming victory over Glencoe-Silver Lake, with Calder Anderson knocking away a 4th-and-goal pass in the end zone, to improve to 4-1.

Unfortunately, the Chargers finished the regular season by losing two of their last three games. Both of those losses – 29-28 to Litchfield, and 28-20 to Annandale – were of the last-minute variety.

Those losses pushed DC’s record to an unremarkable 5-3 at the end of the regular season.

Based on this, the pundits gave Dassel-Cokato long odds to advance very far in the postseason.

The Chargers would not only prove the pundits very wrong, they would exact some ultimate retribution.

DC was named the No. 3 seed in the Section 2AAA playoffs, and opened the postseason at home against No. 6 Rockford (2-7).

The Chargers scored an easy 50-12 victory, scoring on their first five possessions en route to a 37-6 halftime lead. The Chargers outgained the Rockets 372-196, with all 372 yards coming on the ground.

The section quarterfinal game pitted DC against No. 2 seed Litchfield, which had defeated the Chargers four weeks earlier on a miraculous last-second touchdown and two-point conversion.

DC was looking for revenge, and got it – big time.

The Chargers forced two turnovers in the game’s first four minutes, and dominated the green-and-white up-and-down the field in a 56-28 victory.

Dassel-Cokato then squared off against No. 4 seed Providence Academy, who had upset top-seeded Glencoe-Silver Lake, in the Section 2AAA title game.

In front of a packed house at Crown College, the Chargers took advantage of several big plays – including a muffed punt recovery, an onside kick recover, and two long touchdowns – to score 20-13 over the Lions, advancing them to their first state tournament in 46 years.

DC was not satisfied with just making the state tournament, however. They were intent on going all the way.

In the state quarterfinals, the Chargers squared off against Section 4AAA champion Cannon Falls at Burnsville High School.

With their backs against the wall – or in this case, their own end zone – DC rallied for a 26-22 victory.

With 6:28 left in the fourth quarter, and trailing 22-19, the Chargers found themselves with the ball at their own two-yard line.

They rattled off a 13-play, 98-yard drive, capped off by a touchdown run from quarterback Sanders Asplin, to go up 26-22, and held off a last-minute Bombers drive to advance to US Bank Stadium for the state semifinals.

In that state semifinal game, DC would face off against a very familiar foe: Annandale, a team they had lost to earlier in the season by a 28-20 score.

For the second straight game, the Chargers pulled off a miraculous finish.

Against Cannon Falls, the offense found themselves backed up against the goal line.

This time, against the Cardinals, it was the defense that found themselves with their backs against the wall.

With the Chargers leading 17-14 in the fourth quarter, Annandale drove down the field and appeared to be poised to take the lead.

However, Logan Benson stripped the Cardinals ball carrier on the one-yard line, and Collin Asplin pounced on the loose ball to give the ball back to the Chargers.

Three plays later, running back Eli Gillman burst through a seam to score an 87-yard touchdown, sealing a 24-14 DC victory.

That win set up one last game at US Bank Stadium, this time against the Pioneers for the state championship.

It would go down as one of the best title games in Minnesota State High School League (MSHSL) history.

The two sides traded scores throughout the contest, with a 32-yard Asplin touchdown run putting the Chargers up 27-22 late in the third quarter.

But, after two straight miraculous finishes, this time, it was the Chargers that fell on the wrong side of late-game heroics.

The Chargers advanced as far as their own 42-yard line, but could not get any further as time expired.

A look at the makeup of the 2019 DC football squad is shown in the chart, right.